A somewhat puzzling outcome of a study of Arthur D Little on the German TV market shows that DTT has the best consumer value and WebTV is highest cost (but also highest supplier value). It is an awkward finding in the light of DTT gradually disappearing in Germany: recently RTLannounced it would withdraw it’s presence from DTT (Prosieben decided to continue). One reason is the cost of network carriage which is implicitly subsidized by network operators. Also the cost of the terminal equipment is assessed as high (which is strange as typically is it an almost zero cost co-function of an existing piece of equipment, and typical IP devices cost 70 euro and may drop to 30 euro (significantly less than that of DVB-T2 receivers) or zero in case of TV integration (which is identical to DVB-T2 integration). 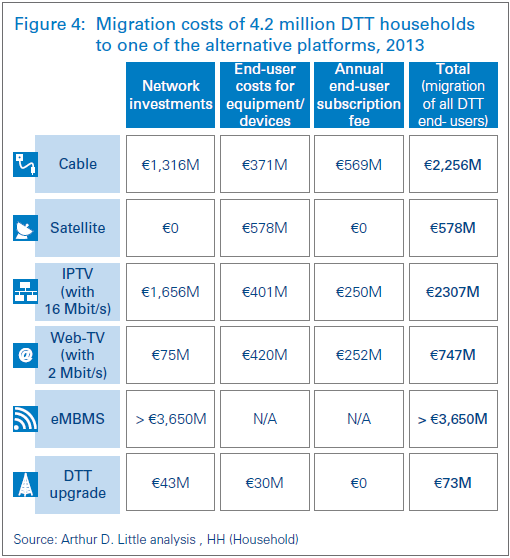 The report argues a DTT upgrade to DVB-T2 is the cheapest solution for the future of supporting the 5M of German households exclusively on DTT today. This is more or less counter the trend of gradually reducing interest in the DTT platform. It is also counter typical marketing wisdom which would simply disregard the 5% minority (with relatively low income) – and since there are ample alternatives there is no social issue. Finally the cost of spectrum is not brought into the equation.

The report does not mention the sponsor, which is customary. Overall this makes the report seem like a lobby statement more than anything else.

Here is the link to the report, and an uncritical report by BroadbandTV news.

French move towards TNT3.0 with DVB-T2, HEVC and UHDTV