In the near future you will be able to display UHDTV from your mobile to your ultra big HD screen with a MHL3.0 cable. The specification will be released early september on the MHL tech website. Not the typical application most of us had in mind for our mobile, but with the insane resolutions of the small screens today and the possibly increasing role of the second screen for navigating content and being the source for the big screen this may make sense after all. May that wire reach all the way  to the couch: i.e. probably an every day TV viewing alternative. This comes on top of all of the wireless alternatives.

Note MHL also competes with MyDP (a DisplayPort derivative), which has much less market support so far. But also MHL support on mobile devives is still very modest.

This is cloud-tv going extreme done by Ziggo. It is based on ActiveVideo (former Avinity) technology that can stream the graphics on top of the video in a one-to-one VOD channel from server to client. Ideal for lower end settop boxes and retail CE devices, where it avoids the complex APIs for running applications locally on the client.

Still: even with a thin client there are some issues: CI+v1.3 based TVs have to provide IP connections to the modules, but unfortunately the response time of some of the TV implementations is poor, leading to sub-par user experience. Ziggo is addressing this with TV manufacturers.

Nevertheless:  despite this small hickup, the seamless  launching of new applications on a uniform platform will be the greatest asset of this approach.

The most typical alternative to this approach is to use HTML4 or 5 browser technology on the client. That is also coming along of course. But some older clients haven’t got such browsers, and could not even be upgraded to run them. Browser implementations always have their individual quirks however. But browsers mix well with OTT, the ActiveVideo technology cannot work in high latency video environments and needs a direct low latency cable or IPTV connection. 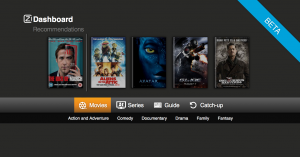 Maybe Mr. Eric Schmidt likes his smartphone more than his TV remote, and that explains why he thinks TV is dead. But still, that big screen is something that needs to be addressed, be it from a google Android powered phone or a chrome browser. And that works with a little HDMI stick for $35 called Chromecast. Also Netflix, YouTube and Google Play Movies applications work with Chomecast. There is an SDK to develop new Chromecast enables applications. Here is a decent review on Engadget and the WSJ. 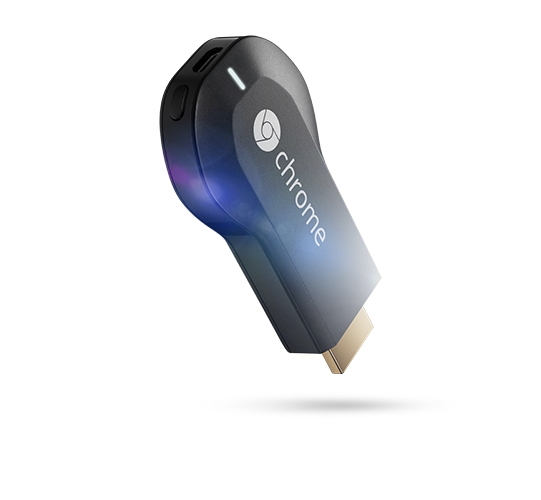 The stick allows content to be selected on a smartphone, chome browser or specifically enabled app and streamed to the stick. The remote control is done with the smart-phone or the browser platform. A simple but potentially very powerful paradigm.

Here is Google’s story on this at their launch event:

Is this a significant development or yet another TV streaming add on? At minimum it’s significance is that streaming content to a TV that is accessible on a smartphone or on the web via a (chrome) browser has become easy. That may attract some people. Is it a real game changer though: will it take away the user interface from the TV and put it in the hands of the smart-phone app? That is much less likely for a number of reasons. But it does challenge TV manufacturers and PayTV operators to come up with better and more convenient ways to provide access to content. If the second screen becomes dominant in content discovery for the big screen, the TV may become that dumb screen it is today in so many settop box equipped homes. PayTV operators may loose out offering that high premium content they create their margins with. But there is still a long way to go for that.

A more synergistic path could be the integration of Chromecast in TVs. Superficially speaking the hardware could probably be absorbed by new connected TVs, but the question is whether the software can be integrated easily. Of course it does require manufacturers to come terms with permitting a competing content navigation paradigm to gain easy access to the big screen, competing with their own smart TV functions. But on the other hand: there are already many external content sources, wireless HDMI and wifi based ways of streaming content to TVs, so why be paranoid about this one.

The short term key issue for Google it probably simply to quickly gain more access to TV screens for their services YouTube and Google Play. The $35 pricetag suggests a device at barely more than factory price. This is a plain old service provider sponsoring settop box type model, analogous to the BSkyB launch in the UK of the NOW TV box for 10 UKpounds.

The real comparisons are to Roku and Apple TV. The Roku streaming stick even has the same form factor but a much more constrained application (due to it’s reliance on MHL interfacing and other interoperability issues between the host TV and the stick requiring a certification programme).

As a conclusion: Chromecast tries to establish a video publishing platform for streaming services with a google centric model. It is pretty open and neutral, but it will of course have a google heart.

Videonet has published an interview with two TV industry insiders about the big picture implcations of Chromecast similar to the ambitions of this article. The ambition of the interview is not met however: no significant arguments are brought forward on why Chromecast is not simply a (potentially inconvenient implementation of) a wireless screen casting technology. The article even branches out to the use of “stick technology” to replace settop boxes which is irrelevant to the main issue.

In all fairness , in the interview Steve Hawley (Industry Analyst) does characterize it well, albeit a bit negative: It is disruptive, but not because it’s entirely new. Chromecast can be simply another distribution channel for pay TV and OTT content providers, and in turn, it becomes yet another platform for them to develop and test for.

There is also a good early analysis by Jim O’Neill, US industry insider that helps to provide background to this topic that deserves a reference. It specifically adds more views on the content that google can now bring to the user with its platform.

The Opera Appstore technology has some difficulty coming to market. One of the reasons is that it is competing with similar initiatives already deployed by it’s customers: CE manufacturers. So far the Oper initiative has not seen much success: maybe they fare better this tine with some help of Dailymotion. 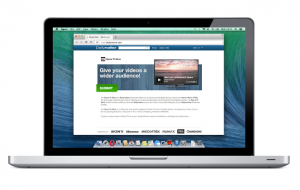 Videonet has published a fairly stimulating “Editor opinion” which poses that the TV industry is loosing the battle with its present connected TV approach. Various figures show enormous popularity of various online TV services on mobile and tablet platforms, rising popularity of (also online) PayTV, and online FTA broadcaster initiatives. Development of applications for connected TV is fragmented and the replacement cycle for TVs is still not very fast.

Some critique is in place however: live streaming of channels is not available on 2nd screen devices. So the craving for content on 2nd screens is now filled with the available online initiatives – sort of explaining the skewed figures. And more from a distance: is the large screen really under threat? For the 2nd and 3rd TV in the home it is, but hardly for the first screen. And that is getting bigger and bigger. Nevertheless, maybe in 2 years from now many of us watch online stuff from our tablet streamed wirelessly with Miracast onto that big screen; and the TV becomes a monitor again. And all of us will say that Mr. Schmidt from Google was a true visionary. 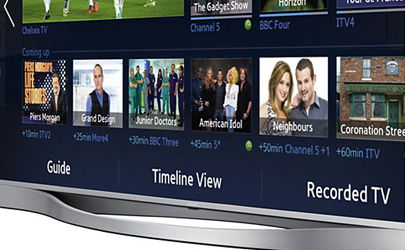 The TV industry has chosen to compete rather than to collaborate in the connected TV space. This has probably accelerated the initial development, but now the downside of that choice is starting to be felt.